How I make my postcards

One of my hobbies was photography. I used to have a super zoom camera, Nikon Coolpix P500 which I brought with me when traveling around. I liked going to the hills and mountains, to the beach and islands. With its 36 x optical zoom, I was able to shoot distant subjects such as birds in the tall trees or fishermen catching fish in the middle of the sea. I took a lot of pictures using that digital camera as my raw materials for making postcards that I sold in my home based bookstore, Xavier.
The photos which I took were mostly about city view taken from a high hill in Manokwari town, animals, unique mushrooms, insects and birds. These photographs needed to be processed in Adobe Photoshop CS3 where I resized, added text caption, and adjusted their brightness and contrast. 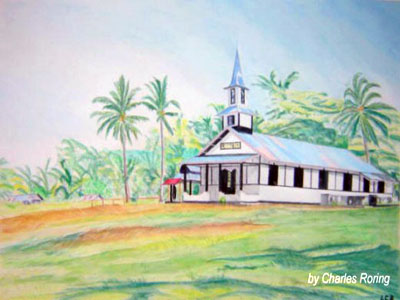 Usually, I wrote a short description behind the postcards to help tourists understand the object or the scenery presented on the postcards.
I started selling my postcards on 5 February 2010. Thousands of people visited this town on 5 February to celebrate the Gospel Preaching Day in Manokwari. Some tourists from the Netherlands also came. They visited my bookstore looking for postcards. They had been looking around the town to find where they could buy postcards. They said that only my Xavier bookstore that offered postcards in this town. They bought all of the postcards that were available. Until now I have not printed new ones because I am busy updating the content of my travel blog.
I printed 4 postcards which I arrange in every piece of A4 photo paper. The printer that I use was Canon Pixma IP 1200. The best quality postcard could be obtained if I printed the postcards using laser printer. Unfortunately, I did not have it. I used Microsoft publisher to design the postcards. I did not make complicated design. My postcards were simple. There was a photograph at the front side and a short description at the back. The postcard needed to be inserted into an envelope which I also provided it.

Yesterday, I went into the tropical rainforest of the Table Mountain in Manokwari regency with a Norwegian researcher. We were walking through the jungle teeming with wildlife. I was able to take some pictures that were good for making postcards. I planned to print some this week.
I also made paintings and drawings. Because drawing and painting with watercolor was my other hobby, I took pictures of them and then printed them as postcards. A friend of mine was also a good drawing artist. He created beautiful paintings using watercolor pencils. I had a small business agreement with him. For every postcard that I was able to sell from his artworks to tourists, he would get one thousand rupiahs. So far he received around 60 US dollars from this small business which we started in December 2010.
If you readers are interested in this business, you could also make a business arrangement with local artists where you could use their paintings for making postcards. Usually artists will receive 10% of the revenue. They might demand higher share and you need to calculate it by yourself to determine whether it is a viable business or not.

Personally, I sell my postcards at my own home based bookstore. But there are also other possibilities where I can sell postcards at post office, souvenir shops and at the airport.
I also used to visit a number of websites and blogs that sell postcards through the internet. It is interesting to sell such products from the internet but I don't know whether people will be serious to buy them. So, if you are interested in selling postcards, why don't you travel around your town tomorrow, take pictures and start printing them in postcard size and sell them at souvenir shops in your town.