Sketch of Red Bird of Paradise

Here are a few sketches of Red Bird of Paradise (Paradisaea rubra) that I saw in tropical rainforest of Raja Ampat. I was guiding three visitors from the United States and from India in eastern region of Waigeo island when I saw the birds in high tree. Waigeo is also the natural habitat of Wilson's Bird of Paradise. They spent nearly one week traveling around northeast region of Raja Ampat islands to watch birds. It was part of a long-2-week tour covering three regencies in West Papua i.e. Raja Ampat, Sorong, and Manokwari. We started the tour by leaving Sorong city for Sopen village in northeast of Waigeo island. First, we went snorkeling at Isanak beach and then we enjoyed birding and camping in the jungle. Later, we explored uninhabited islands and grilled freshly caught fish by the beach. 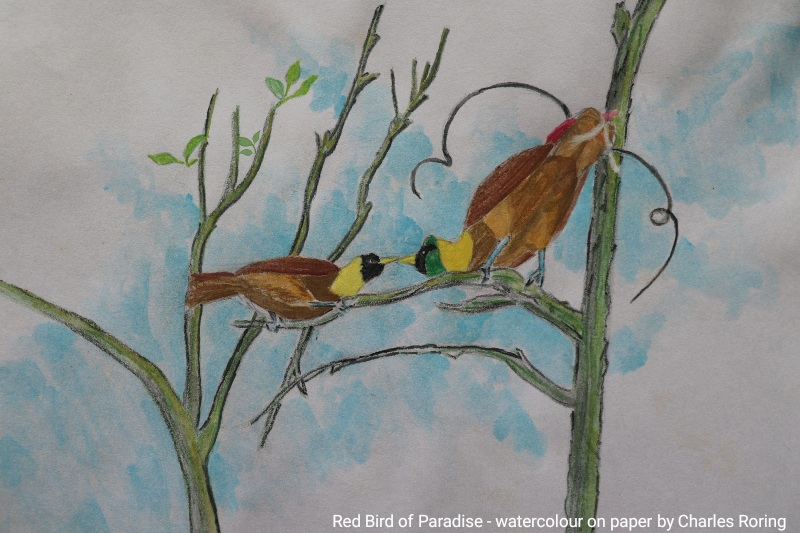 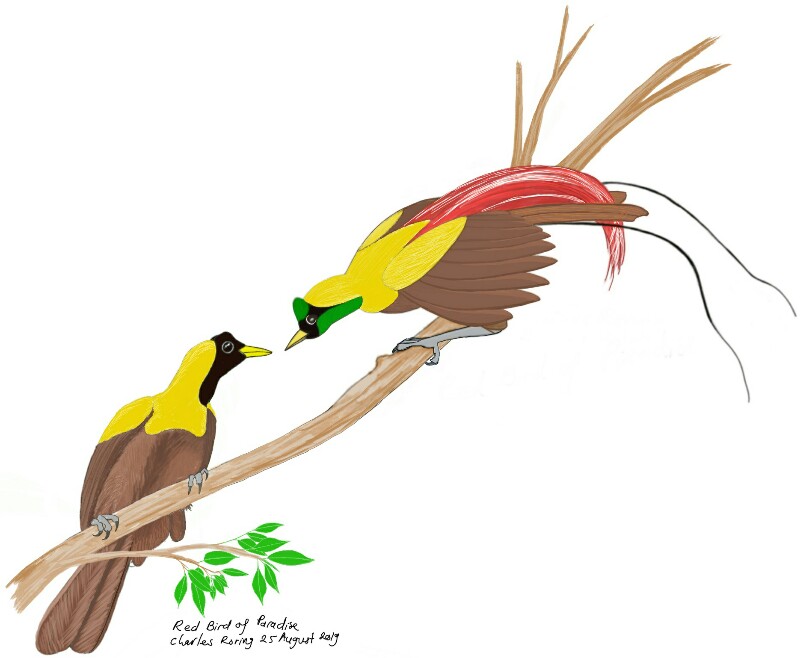 a rough sketch of a male Red Bird of Paradise

We watched Red Bird of Paradise early in the morning after spending one night camping in at the bank of Mamdifu river. It rained a lot and I could not sleep well. It was not only paradise birds that we saw in Raja Ampat. We also saw kingfishers, sulphur crested cockatoo, sunbird, brahminy kite, hornbill, rainbow bee-eater, black noody, tern, pink spotted fruit dove. I saw the courtship dance performance of the male bird when trying to attract the female bird.

I used a pair of 10×42mm binoculars to watch them. The Red Birds of Paradise were dancing in high trees. It was not easy to take pictures of them. My camera was a point and shoot Fujifilm HS50EXR. I also brought a Kinglux 20-60×60 mm spotting scope. It was a great birdwatching device especially for watching not only birds but also flowers, lizard, and cuscus possum in high trees.

I think it will be a great idea if I could provide a sketch of the birds and present it in this website. I hope that readers of this Wildartlife.com will have an idea of how the female and male Red Bird of Paradise look like. Male is more beautiful than the female. He has got red, yellow, brown, and green feather. I draw the sketch using pencil and then color it with Derwent Watercolor Pencils. written by Charles Roring